Planning in Kenya at a Glance

Planning in Kenya at a Glance

Kenya gained independence in 1963 marking the transition from colonial to an independent government. In 1964, the country was declared a republic. This marked the beginning of major economic mobilization and reorganization of resources to attain rapid economic growth for the benefit of its people.

In 1965, Sessional Paper number 1 of 1965 on “African Socialism and its application to Planning in Kenya” was produced as the main long-term policy paper. The paper contained policies on African socialism which aimed at reducing poverty, ignorance and diseases.  The average GDP growth rate was 8% mainly attributed to the good agricultural harvest due to favorable weather conditions especially in 1966.

The Sessional Paper No. 10 of 1965 established the principle of state direction of development process while at the same time arguing for decentralized planning based on local input. The paper postulated that Kenyan Government should aim at achieving the following objectives: Political Equity, Social Justice and Human dignity.

The National Development Plans were succeeded by the Economic Recovery Strategy for Wealth and Employment Creation (ERS)  covering the period 2003-2007. The success of the ERS led to forward thinking into long term development planning that informed the development of the Kenya Vision 2030 in 2008. The Vision is implemented in five-year successive Medium-Term Plans.

Kenya Vision 2030 was launched on 10th June, 2008 and passed by the 10th Parliament as Sessional Paper No: 10 of 2012. The Sessional paper no. 10 of 2012 entrenches Kenya Vision 2030 as a long-term development strategy for the country. The Vision aims at transforming the country into a newly industrializing, globally competitive, and prosperous middle-income country with a high quality of life for all citizens by 2030. It identifies three pillars namely economic, social and political, that are critical in achieving the desired transformation by 2030. 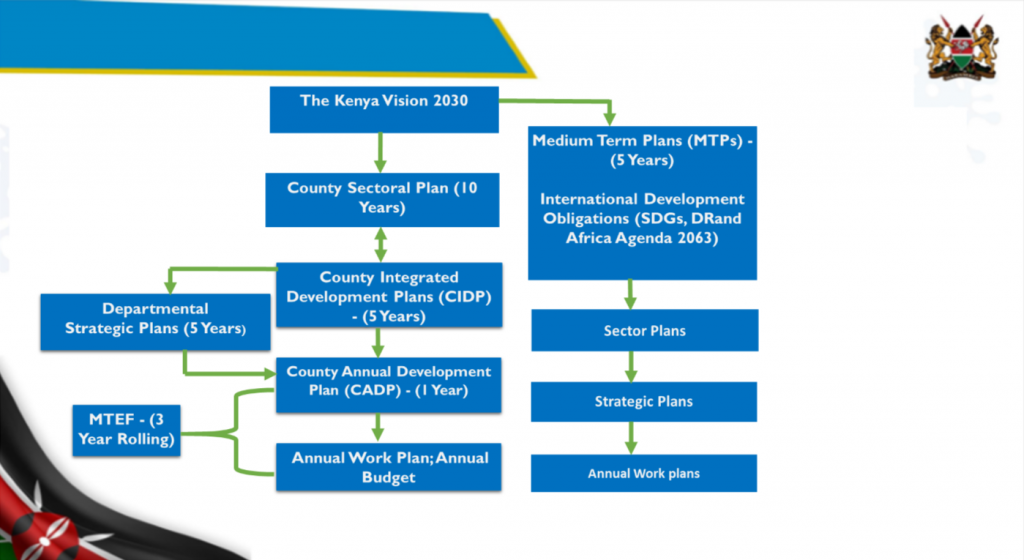